India cricketer Rohit Sharma took to Instagram on Friday to celebrate Real Madrid winning their 34th La Liga title, saying there was “finally some good news in a year that is severely lacking any”. Along with a caption, Rohit also shared posted a picture of himself all smiles, wearing a Real Madrid jersey. However, Yuzvendra Chahal, who is made a habit of gatecrashing his teammates’ posts or Live chats on Instagram, once again made light of things, poking fun at Rohit Sharma by saying that the real reason for “this smile” was not Real Madrid’s triumph but “aaj ghar ka kaam nahi karna padhega no jhaadu no pochaa”. 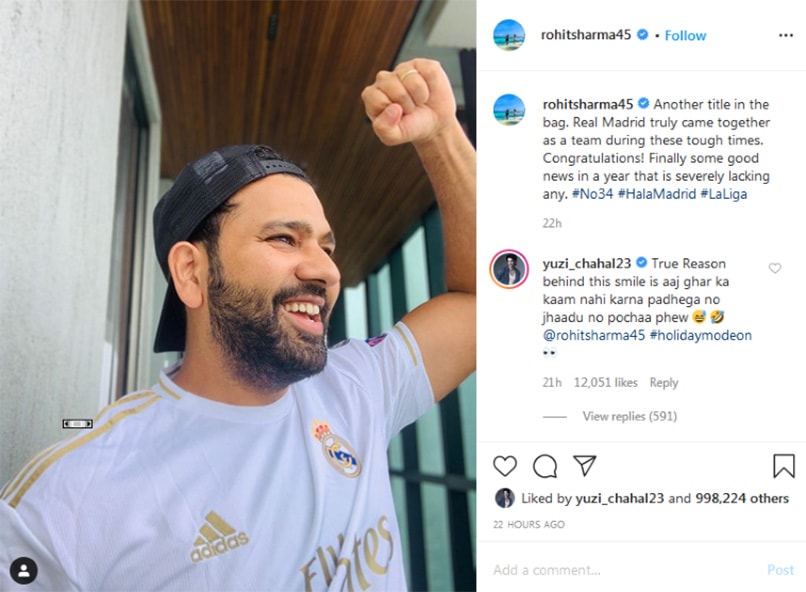 In December 2019, Rohit Sharma was named La Liga’s brand ambassador, saying he was excited for the partnership.

Hola India/Espaa, as you guys know, football has always held a special place in my heart so this association is so special to me. And to be named the ambassador for the La Liga is so humbling. So excited for this partnership @LaLigaEN pic.twitter.com/prZFFSeHdV

In March this year, Rohit Sharma had shared pictures of him at the Santiago Bernabeu (Real Madrid’s home) along with a Real Madrid jersey with ‘RO’ written at the back.

Real Madrid zoomed to the top of the table, winning 10 matches out of 11 since the restart. Barcelona needed a win against Osasuna at home and hope Real Madrid lost if they were to have any chance of remaining in the title race.

However, despite a brilliant free-kick from Lionel Messi, Barcelona suffered a shock 2-1 loss while Karim Benzema scored a brace in Real Madrid’s 2-1 victory over Villarreal which clinched the title with one game to spare.