Before starting I’d just like to say I respect and cherish Ben Stokes. I venerate Ben Stokes. I revere him to the correct degree and in accordance with approved norms and standards.

Let me make this clearer. Sometimes, while I’m thinking about how much I like Stokes, I’ll sit and watch his close-up TV highlights montages, then slow them down and watch them back, studying the way the droplets of moisture fall as he turns and yells and punches the air or looks soulful and defiant at second slip; until eventually it gets dark and the only light in the room comes from the clump of blue pixels that together form an image of Stokes, burning that outline into the air.

A process is in train that we might call montage-saturation. Stokes has appeared so many times in those familiar poses: nobly helmet-less, raging in wicket-celebration, even floppy-haired now, looking like the world’s most handsome oil rigger performing a beautifully shot physical ballet of triumph and pain.

Certainly, this iconography is present in the way sporting and social media portray him these days. Stokes was astonishingly good during the West Indies series. He averaged 90 with the bat and 16 with the ball, the only proper response to which is LOL. Afterwards he was described in various places as a superhero. Joe Root called him Mr Incredible. This was the general tone, a sense of some flawless macro-being, who simply needs to open his mouth and angels of the ark fly from his tonsils and melt the Nazis.

Once you notice it, the effect can become quite jarring. Watch or listen to the coverage and it’s as though some edict has been passed down to mention the name Ben Stokes every 30 seconds. Cameras seek him out. Directors cut to him hungrily.

The former-pro punditry class, who know more than most about how hard it is to be this fearlessly good, seem almost to crave him physically, to want to be enclosed in the brawny arms of our only living master of all disciplines across all formats.

And of course there is a form of bingo to be played. Stokes will play one of those brilliant, almost stationary on-drives and a voice will say: “That’s Ben Stokes when you know everything is working just right.” Later, perhaps after a wicket, it will become clear that you just can’t keep him out of the game, as though unseen forces have been trying to do exactly this but have now decisively failed.

Who do you throw the ball to when you need a wicket? Well, who? Plus of course should something go wrong then Ben Stokes of all people has dropped a catch. In such instances it is also vital to remember he is human after all.

Let’s be clear, this is separate to the real-life business of being the greatest cricketer England has produced in the multi-format era. Stokes has the full set now: man of the match in a World Cup final, the IPL’s most valuable player and an old school Test match craftsman. For a while people would hide his mediocre averages behind talk of selflessness. But the outline numbers are properly good now: 43 with the bat and 28 with the ball in Tests in the past three years. 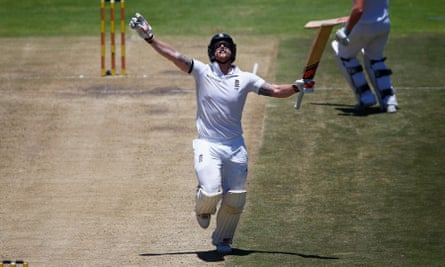 Best of all are the highs: the theatre of last year’s Ashes; that violent double hundred at Newlands, an innings built around whiplash slog-pulls into the distant skies, a shot played with the brutality of a man very deliberately dismantling a static caravan with a polo mallet; and my own favourite, the hundred in his second Test at the Waca, when Stokes, 22, took 120 from a truly fearsome attack, leaving the Australia bowlers baffled at times, as though asking each other, what is this thing, this bristling boy-warrior, and inducing for the first time that strange state of husky, tearful longing.

This is something new. We have had very good and very famous cricketers before, from WG Grace’s pomp to the panto swagger of Ian Botham. It’s not straight-up celebrity power but is instead closer to a kind of reverence, something fuzzy and unconditional and unlike anything I can remember for a still-active sportsperson.

Watching those beautiful film sequences, reading the tearful elegies, you have to keep reminding yourself Stokes isn’t dead, or a sad, lost, heroic sea captain who saved the fleet from the storm and went down with his dinghy.

Why is this happening? Clearly it has a lot to do with the cult of celebrity and with cricket catching up with the routine star-fuckery of other sports. But beyond this there is surely something else behind the New Soppiness.

These are deeply anxious times. People are isolated, uncertain at work and home. In the middle of which sport is still being beamed into our private spaces, these life-sized figures providing escape and luminous entertainment.

A similar process has occurred in football. Before the pandemic players were frequently portrayed as moneyed yobs. In times of doubt and fear footballers have become instead role models and radicals. We revere them. We applaud them. We look, slightly desperately, for heroes.

None of this has much to do with sport. It relates instead to sport as something wider, some outsized realm of escape and consolation, a dream space. Stokes makes us feel better. To watch him is to feel not only entertained but removed from the everyday. Which has, perhaps, been the real point all along.